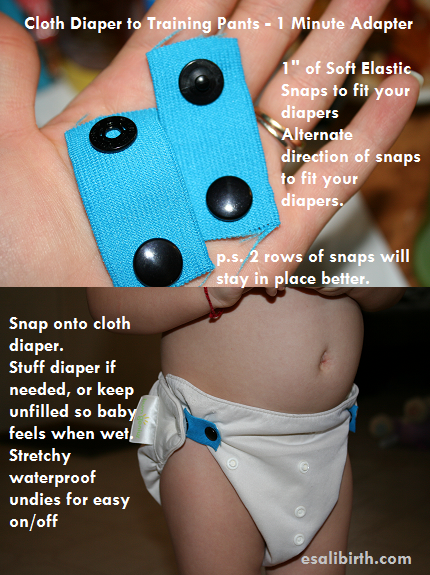 If you follow me on my Facebook page, you'll probably see about my son peeing off the porch, in Tupperware, and various other "interesting" places around the house.  Diaper free babies are interesting.  I don't fully EC, but I do start putting them on the potty as soon as they have good control to sit up a little so they get some air time and used to going in something besides their diaper.  Then, I watch their signs (some while they're diapered, and many times while they're running in their birthday suit).  It isn't always easy to see a sign... and it isn't always easy to live a lifestyle that accommodates diaper-free, unfortunately.  When other caregivers are in the mix and they don't know your baby's signs (or willing to learn them), it can be a little difficult.  If you're on the go a lot, it isn't always easy to accommodate this easier.

Most people I mention this to give me a really odd look.  My thoughts?  What is at least a little bit of EC going to hurt?  Most babies have signs that they're going to pee or poop, and even if you don't notice this, it is almost a sure bet you can save at least one diaper a day by putting them on the toilet as soon as they wake up.  Not to mention, diapers (cloth or disposable) are kind of gross and their bottoms will thank you for any diaper-free time they get!

So, my son is a little more of an explorer than what my daughter was, so it hasn't been as black and white of an experiment with him.  He's a boy.  He thinks its fun to pee on things and in things.  The main problem is he uses the toilet almost regularly by himself... and has for many months; well before he turned two.  Working up to that point, we had a lot of the interesting not-so-much-accidents.  But, even now that it's a pretty regular thing, he only really thinks about it if he's naked.  Luckily I haven't dealt with a poopy diaper in... wow, I can't even remember.  He definitely wants privacy for that and does ask if he's dressed.  50% of the time, he'll go to the restroom or ask if he has a diaper on to pee, or just some undies, and at night he is almost always dry.  Our main issue is that I'm kind of lazy at night, and I really hate to mess with his diaper.  (He's also not consistent enough being dry in the mornings for me to be comfortable messing with more laundry than I have to... I have enough to do).  So, he's usually in a diaper at night and most of the time when we leave the house... which is a little annoying.

I don't like changing diapers.  Easy off, but not necessarily easy on.  I also hate to spend the money on something I expect him to use so little.  A few years ago, I converted some hook and loop bum genius cloth diapers into snap diapers, and I decided a little bit of elastic and some leftover snaps would make a great training pants adapter with only a few dollars spent.

You'll want to get some very soft elastic as these may be close to baby's skin and you don't want to pinch or poke them.  You'll need to either add some snaps to your diapers, or buy snaps to fit the diapers you have.

Then, cut the elastic into approximately 1" length.  You'll add two (or 4 snaps... depending on how many rows of snaps you have.  2 Rows works much better).  Alternate the snaps so they snap to the snaps that are already in place.  Then, you can leave these snapped at all times, and pull the diaper on and off like training pants.  Stuff them as needed, or leave them unfilled like underwear to help baby better feel when they're wet.

One Reply to “Cloth Training Pants”